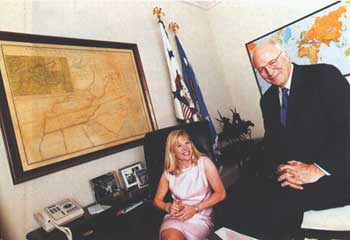 House & Garden story inspires birthday gift for Vice President!
When Liz (above) and Mary Cheney commissioned a 60th-birthday gift for their father - an artwork showing the geographic sweep of his great-grandfather's Civil War service - they had no idea that their dad, Vice President Dick Cheney, would celebrate the day in the White House. The family didn't know much about Samuel Fletcher Cheney. "At home, his sword stood in a barrel with the baseball bats," the Vice President said. Using details that the sisters uncovered, Julie Ruff and Connie Brown at Redstone Studios (House & Garden, September 1999) created a map reminiscent of Civil War-era cartography that narrates the young soldier's wartime adventures. The map now hangs prominently in Cheney's West Wing office. He likes to imagine his ancestor marching up Pennsylvania Avenue at war's end in the Grand Army review - not far from where his great-grandson sits now.