Would you like to make a cool little round map ? I’d like to teach you how–free, in my Durham CT studio, from 2-5 pm on Sunday, March 27th, followed by wine and cheese (what fool gives a workshop with NO SNACKS?) With Matt Knutzen, the New York Public Library’s Geospatial Librarian (and cartographer/artist), I gave such an autumn workshop at the New York Public Library as part of their Crafternoon series. It was fun–50 attendees made all kinds of clever and meaningful maps–like the guy who mapped his kitchen from his cat’s perspective, or the young woman who mapped romantic locations in NYC as an anniversary present for her husband. I’d like to test-drive a more intimate studio workshop, limited to 10 attendees. Reserve a spot with me: connie@redstonestudios.com.

Here’s the first round map I ever made, Greg’s World of Burritos (2007), which some of you may be just plain old sick of, I parade it around so much.  But it’s a good model for you nascent mapmakers: it’s simple, low-palette, and small. 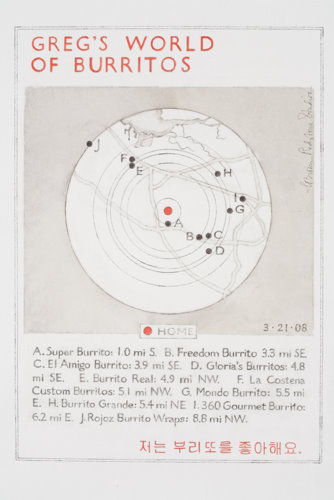