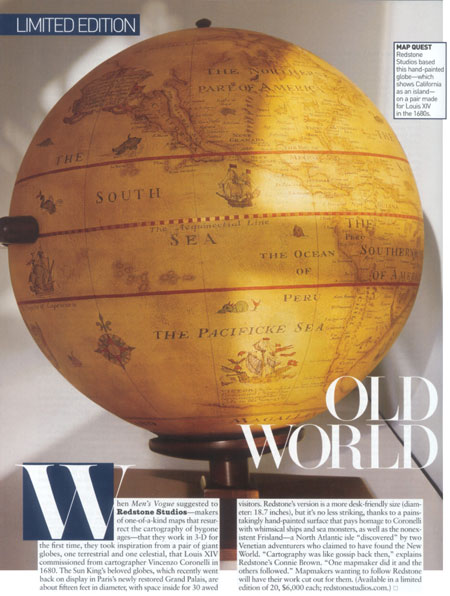 When Men's Vogue suggested to Redstone Studios - makers of one-of-a-kind maps that resurrect the cartography of bygone ages - that they work in 3-D for the first time, they took inspiration from a pair of giant globes, one terrestrial and one celestial, that Louis XIV commissioned from cartographer Vincenzo Coronelli in 1680. The Sun King's beloved globes, which recently went back on display in Paris's newly restored Grand Palais, are about fifteen feet in diameter, with space inside for 30 awed visitors. Redstone's version is a more desk-friendly size (diameter: 18.7 inches) but it's no less striking, thanks to a painstakingly hand-painted surface that pays homage to Coronelli with whimsical ships and sea monsters, as well as the nonexistent Frisland - a North Atlantic isle "discovered" by two Venetian adventurers who claimed to have found the New World. "Cartography was like gossip back then," explains Redstone's Connie Brown. "One mapmaker did it and the others followed." Mapmakers wanting to follow Redstone will have their work cut out for them. (Available in a limited edition of 20, $6,000 each; redstonestudios.com.)