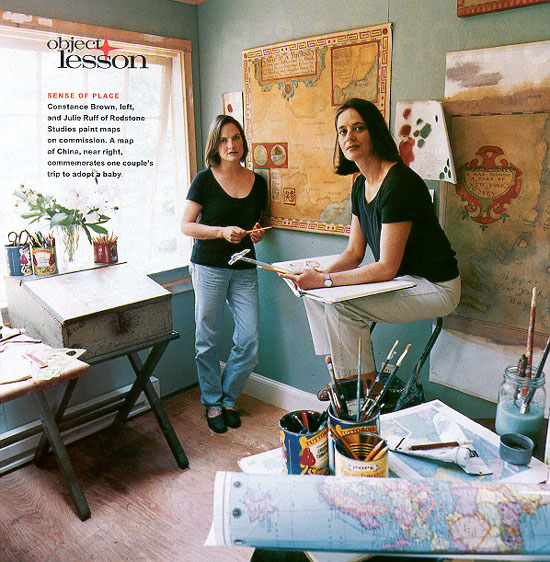 Sometimes the geography between two points is more than just the distance between travelled: it's really a journey of the soul.  No one understands this better than the cartographers at Redstone Studios, artists Constance Brown and Julie Ruff, who create handpainted canvas maps on commission.  One couple ordered a map of China to retrace the route they took to adopt their baby girl, while a Kansas man asked for a map of his wife's ancestors' cattle route.  The artists love antique maps in any style, from the ornate Renaissance kind to the simpler designs of early American maps.  The smallest pieces they do measure almost three by four feet; the largest cover an entire wall.  They need to be big in order to be legible, since each includes lettering and many elements, from cartouches to inset maps.  "What makes it interesting for us is that's it's a collaboration," Brown says.   "People order maps and then begin to send images and poems.  The map becomes an expression of their life."