Anatomy of a Map, Part Three: More Geography (and some lettering) 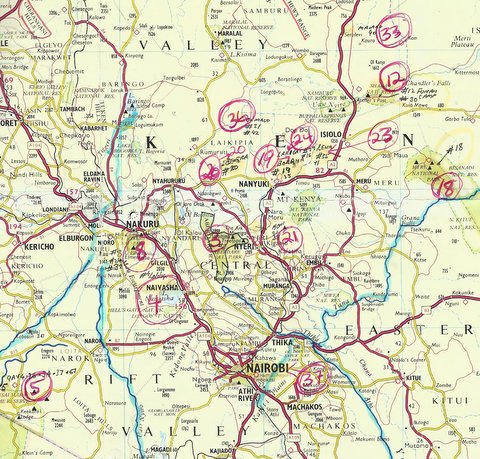 Here’s a detail from the commercial map of East Africa which Anne annotated for me: the circled numbers refer to a list of locations she compiled. You can see that the numbers are heavily concentrated; if I wrote the corresponding place names right on the canvas, they might render the map a “nomenclatural gray” (I borrow this term from Denis Wood and John Fels’ excellent book The Natures of Maps, published in 2008 by the University of Chicago Press). Instead, I decide to follow Anne’s example by providing a key: 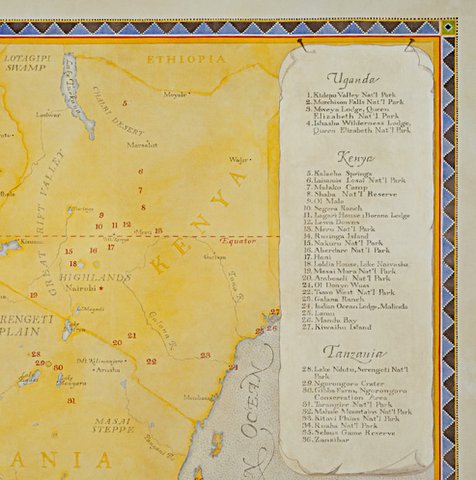 I’ve “superimposed” this list on a part of the map that bears no significance to Anne’s purpose–in fact, I enlarged the scope of the map’s field to include elements like this list. Of course there is no actual map underneath the list of names: this is a bit of mild trompe l’oeil.I like the faux parchment look–having seen it in antique maps, I frequently appropriate it for my purposes. Looking at the map, you’ll see that aside from the red numbers (every map needs a touch of red!), I’ve only included enough general place names to provide context. I have one purpose here, and that is to show my client’s East Africa. There is no Board of Map Correctness hovering over me.

Now look at the lettering styles, both on the map and in the list of place names. For every project, I ponder which lettering styles would work best. Lettering casts a particular spell and contributes greatly (though quietly) to the look and mood of the map. Obviously, the names and numbers have to be legible.  But they have to be graceful and consistent with the design style I’ve chosen for the map. Here I’ve used Bell, a slightly old fashioned Roman lettering, along with Bell’s distinctive numbers (each lettering style, in fact, comes with its own numbers). For the country headings in the faux parchment list, I’ve used Chancery, an updated version of a 16th century lettering style. And I’ve busted out elaborate Renaissance lettering for the Indian Ocean. Obviously I’m a big ole map design nerd, but I bet you, too, would enjoy forming these letters and numbers. We’re the species that invented writing (and alphabets): it’s in our blood.